History and society do not crawl slowly, but leap step by step, they leap from one level to another, with very few twists and turns in between. Man is just a giant looking-back machine.

Black swan incidents refer to highly unpredictable and unusual events that usually cause a negative market chain reaction or even a reversal.

The COVID-19 epidemic in 2020 is regarded as the biggest black swan event in recent years. The demand for forehead thermometer guns, sensors and similar short-demand products grows crazy with fast changing selling price every day. Now as the epidemic has been greatly curbed and the demands gradually cool down, how will the sensors turnout as a core component of forehead thermometer gun?

First, let's start with the principle of infrared sensors. Generally, everything with a temperature above absolute zero (-273.15°C) is constantly emitting infrared energy into the surrounding environment.

The human body, like other living things, also emits infrared energy into the surrounding environment, its wavelength is generally 9 to 13 μm, within the infrared band of 0.76 to 100 μm.

Secondly, the market determines the supply and demand of infrared sensors. As one of the important detecting devices for epidemic screening, diagnosis, prevention and control, the forehead thermometer gun has the advantages of safety, speed, high accuracy and direct reading, and has been widely applied in medical, public health and other scenarios.

In late February, due to the lack of forehead thermometer gun, its unit price rockets from 100 yuan/unit price speculation to 500 ~ 600 yuan/unit. In the market, a large portion of the vendors, in order to stock up, even spent large amounts on buying the production line and components to assemble the forehead thermometer gun on their own. The core electronic part - infrared sensor, has become the most out-of-stock components.

At the same time, as the epidemic cooled down, when the vendors who stocked up forehead thermometer gun saw the business opportunity, and now began to stock up sensors in high price. The huge supply and demand gap is driving the entire temperature measurement industry to increase the prices for the core components and other parts, for example, the price of thermopile sensor goes up from less than 20 yuan/unit, soaring to 115 yuan/unit, up by more than 1000%.

It is reported that a number of domestic sensor manufacturers had scheduled their orders to June or even August, basically no goods in stock. Previously, infrared sensors are mainly imported from overseas, but abroad, some core manufacturers also schedule their orders in six months later. In addition to the impact of the epidemic, the production capacity, transportation and market demand of overseas manufacturers are changing, which will lead to the domestic supply of sensors continue to be tight.

In China, infrared sensors can be widely applied in security surveillance, industrial monitoring, driving assistance, fire fight and police, therefore the infrared sensor industry may usher in a period of rapid growth in market demand.

The leading international infrared sensor enterprises and their main models are as follows: 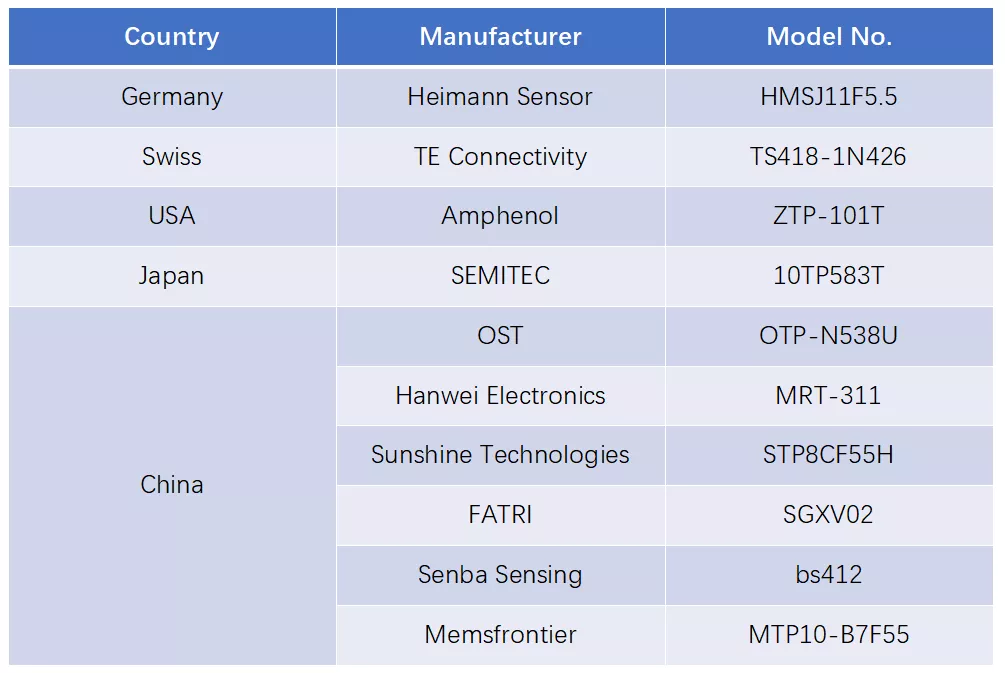 Sunshine Technologies was founded by the Shanghai Institute of Microsystems and Information Technology of the Chinese Academy of Sciences, and is mainly engaged in MEMS sensor technology research, product development, production, sales and technical support application solutions. 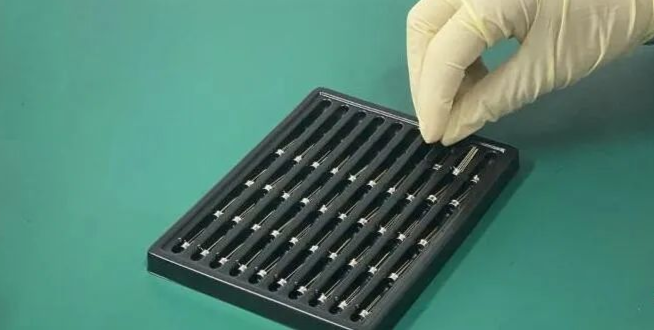 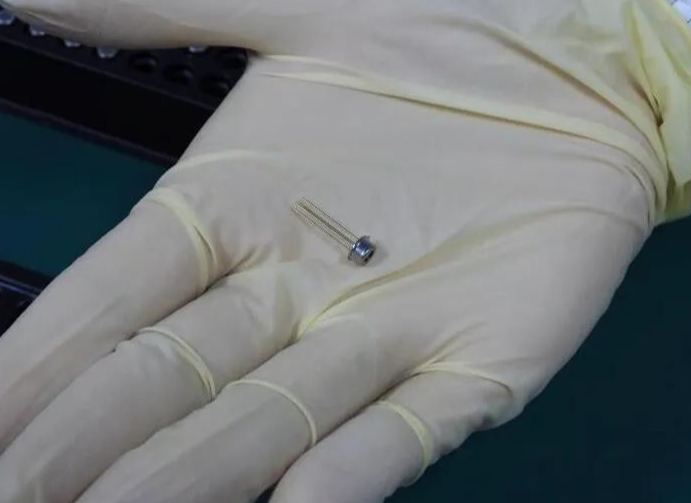 The founder of FATRI has been engaged in the design of aircraft sensors, specializing accelerometers and pressure sensors in the aerospace industry. After the outbreak of the epidemic, FATRI expanded its infrared chip and infrared sensor production line.

From the online report, we learned that after the delivery of FATRI sensors, a lot of domestic brands of forehead thermometer guns spoke highly of FATRI infrared sensor for their accuracy, response rate which are regarded as domestic first-class level. The market heat is evident in the large number of online users seeking to buy FATRI sensors on Baidu Tieba every day.

According to the acquisition announcement, Alpha is a professional supplier of differential pressure sensors with unique core technology in main materials, structural design, processing technology, etc.

In the view of technical strength, FATRI has comprehensive independent research and development capability, from the high technical barriers of civil aviation sensors to infrared sensors, there is no major technical bottleneck. It’s reported that last year, Minister of Industry Miao Wei visited FATRI, to some extent, which also verified the company's comprehensive strength.

The founding team of FATRI has been engaged in the research and development of sensor chips (MEMS chips and ASICs) and sensors for a long time, specializing in various vibration and shock accelerometers, velocity sensors, pressure sensors, displacement sensors, IMU, LiDAR and quantum sensors, as well as test and calibration systems for these sensors. So far, FATRI has obtained more than 180 patents, including 18 international invention patents.

Behind the overall shortage of capacity in the sensor industry is the technical ang talent bottleneck facing the entire industry.

To solve such a dilemma, the first thing to consider how to break through the technical difficulties, expand the equipment, seek industry cooperation, employ senior talent, must be indispensable.

Production has been restarted in Chongqing with the completion of the MEMS thermopile infrared sensor production line in Shanghai, bringing the daily capacity of Sunshine Technologies to 50,000 sensors.

In the fourth episode of jiwei.com, Sunshine Technologies's chairman, Mr. Xu Dehui, said that Sunshine Technologies has not been on vacation to ensure the delivery of goods during the Spring Festival. But after February, the shortage of packaging materials directly led to a slowdown in the expansion of production capacity.

From January to the end of February, CR MICRO delivered millions of sensors to Sunshine Technologies, and expects the total to be more than four times as before by April, but may still not be able to meet the growing demand for forehead thermometer guns.

In fact, CR MICRO itself does not have a capacity problem, the infrared temperature measurement chip capacity is mainly stuck downstream. So, CR MICRO has also helped Sunshine Technologies solve downstream problems, including shortage of packaging materials and insufficient capacity, etc.

Previously, Xu Dehui also said that the usual order volume is about 1 million chips, but February's order has been close to 4 million, their max production capacity is 5 million.

The online report shows that FATRI has recently imported mask aligner, coating developer, PECVD and other high-end equipment, production can be greatly increased. FATRI is urgently adjusting its other sensor production lines (including pressure sensors, piezoelectric sensors, silicon microphone sensors, etc.) to suspend all production capacity to support the production of infrared sensors, and also seek cooperation in the industry chain.

At the same time, FATRI has recently recruited a large number of etching engineers, diffusion process engineers and quality engineers and other high-end positions, from the equipment, industry chain and talent at many levels, to greatly enhance the enterprise's own production capacity, is expected to solve the current shortage dilemma of domestic infrared sensor production capacity.

The demand for ventilators, forehead thermometer guns and sensors in overseas markets will continue to be high under the complex and changing epidemic. The contradiction between the burgeoning demand for sensors and the domestic sensor industry's short supply is gradually easing.

This group of high-tech companies, which are leading the domestic technology, have written a low-key and pragmatic chapter amid the fight against the epidemic with their calm thinking, quick response and positive attitude of seeking upstream and downstream cooperation under the severe market environment.

The black swan of the epidemic will eventually pass, but eventually the quality and performance is still what these domestic sensor vendors have to face with.