8 Trends of Optical Communication Industry in 2020

In this extraordinary year of 2020, a lot of extraordinary things have happened in the optical communication industry. We have made a review and let’s check the trends in 2020.

In 2019, the Ministry of Industry and Information Technology proposed the “Double G and Double Speed Up” to accelerate the construction of gigabit fiber and 5G, and continuously improve the service capacity of broadband infrastructure. With the maturity of the WiFi6 industry, the three major operators (China Mobile, China Telecom, China Unicom) have launched a gigabit 5G + gigabit broadband + gigabit Wi-Fi "three gigabit" services in 2020.

By the end of November, the three basic telecommunication companies had 5.88 million fixed Internet broadband access users with gigabit access rates, and more than 90 million users with gigabit rate. A total of 718,000 5G base stations were built, and the number of 5G terminal connections exceeded 200 million. At the same time, the three major operators also launched a large-scale collection of Wi-Fi6 smart home gateways this year to accelerate the development of "three gigabit".

In this market environment, fiber optic manufacturers have chosen to transform for development, advancing upstream and downstream to optical modules and extending to "new infrastructure" such as 5G and industrial Internet. Despite the pooled procurement price is unsatisfactory, the fiber optic industry is moving out of the bottom area and into the blue sea.

In early 2020, LightCounting noted that Chinese optical module suppliers will dominate the global market in 2020, with a market share of more than 50%. At the same time, for the first time, there are five Chinese vendors in the global top 10, namely InnoLight, Hisense, Accelink, HG Genuine and Eoptolink, compared to only one company in 2010. 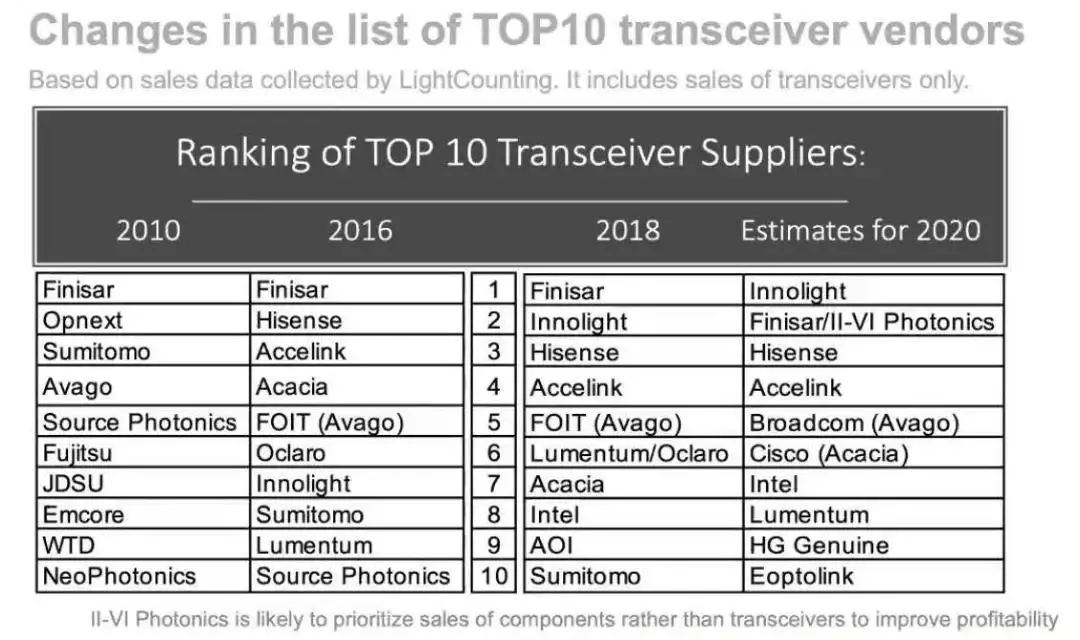 However, China's optoelectronic device industry technology development roadmap (2018-2020) points out that although China has the world's largest optical communications market and high-quality system equipment providers, but China's optical communications device industry in the global share of the existing resources do not match, especially in the field of high-speed optical chip, the localization rate is less than 10%, it is difficult to compete with the U.S. and Japanese enterprises. Manufacturers need to arrange for a good layout, tearing off the "big but not strong" label.

Domestic optical communication manufacturers began to active and integrate through mergers and acquisitions to form a stronger competitive edge.

"5G commercial, bearing first", a high-quality bearer network is "5G change society" a strong support. For optical device manufacturers, in the process of construction of the bearer network, 5G fronthaul is the main battlefield. At present, it has become a consensus that xWDM technology is the main choice for 5G fronthaul, while supporting the OAM mechanism of the semi-active program to become the WDM fronthaul deployment hot spot. 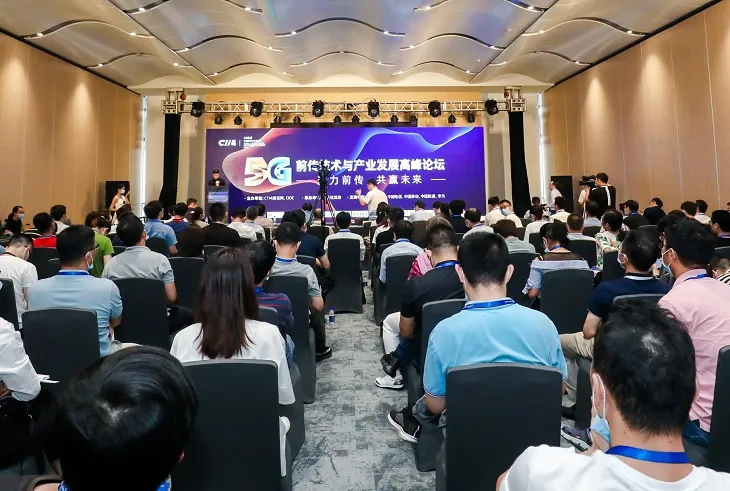 Due to the existence of multiple deployment modes of 5G RAN, a variety of fronthaul solutions have been spawned. Currently, the three major operators in China have chosen different fronthaul technology solutions based on their own business needs. China Mobile mainly applies MWDM, China Telecom mainly applies LWDM, and China Unicom is on the way of DWDM based on tunable lasers. In terms of industry chain support, manufacturers include equipment, modules, chips, testing and others are ready.

High speed has been the main theme of optical network development. Currently, 100Gbit/s is the mainstream transmission rate of backbone and metro networks, etc., 200Gbit/s deployment has also carried out the initial scale deployment, based on a single-pass 400Gbit/s WDM system related standards in the ITU-T, IEEE, OIF and domestic CCSA have been basically completed. It is expected to gradually commercial use in regional backbone, metro, data center interconnection and other scenarios, and with 100Gbit/s, 200Gbit/s rate system together to solve the problem of long-distance transmission.

Going super 400Gbit/s is not the end, the industry has shown particular interests in the development of 800Gbit/s. Huawei, ZTE, Ciena, Infinera and other domestic and foreign transmission equipment providers and operators cooperate to continuously launch 800G live network trials and compete to verify the feasibility of 800G technology. Organizations such as IEEE, OIF, Ethernet Alliance, CCSA, etc. have started or are preparing to start 800Gbit/s standardization studies. It is expected that the super 400Gbit/s rate, typified by 800Gbit/s, will be the focus of industry in the next few years.

Open and flexible becomes the direction of optical network development

The Executive Deputy Director of the Ministry of Industry and Information Technology Communications Science and Technology Committee, and the Director of the Science and Technology Committee of China Telecom Group, Wei Le Ping, pointed out that starting from the wireless access network, all areas of the network will gradually move towards openness, interface standardization, software and hardware decoupling, hardware white-boxing, and software open source, and the all-optical based transmission network will not be an exception, and the all-optical network will also move towards an open ecology.

In addition, the access network cloud is also the future development trend, based on the concept of broad SDN to build a new generation of access network architecture, OLT functional module decomposition and reconfiguration to lay the foundation for access network cloud. Through built-in computing storage to support network and service virtualization, which can better meet the efficient decoupling, new business development and network transformation. In the future, the gigabit access network will gradually expand from home broadband access to smart parks, smart cities, industrial Internet, and other fields.

Silicon photonic is the future trend and Chinese players are emerging

With the development of cloud computing, big data, Internet of Things and big video applications, global network data traffic doubles every three years. Silicon photonic technology has been the hotspot in the industry for its better reliability, lower price, and other advantages, and is considered to be the future of optical devices, especially in data center applications. Yole analysts expect that in the data center market, silicon optical module shipments in 2025 will reach 24 million, worth $3.6 billion. By then, the overall market size of silicon photonics will reach $3.9 billion. 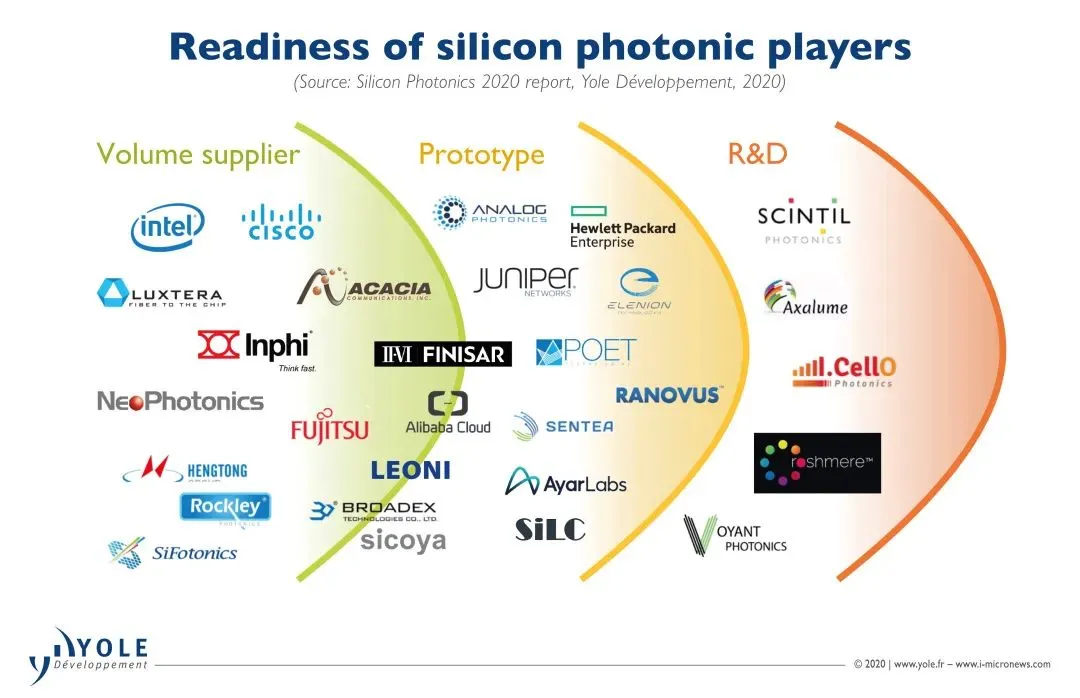 Many foreign manufacturers such as Cisco, Intel and Juniper Networks are strengthening their silicon photonic technology layout through M&A integration. 2020 several Chinese companies are entering the silicon photonic market with good performance. Aliyun is collaborating with Elenion, Hengtong Optoelectronic is partnering with Rockley Photonics and launching 400G silicon optic digital pass-through optical modules during OFC 2020, and Broadex Tech is partnering with Sicoya…