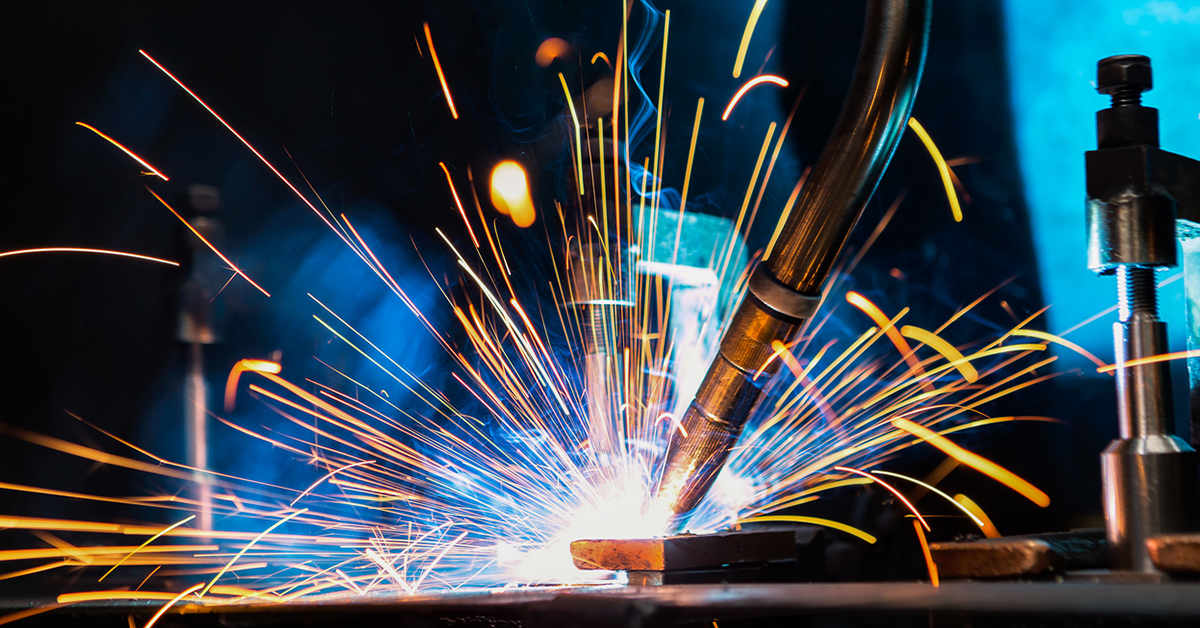 China's laser and laser equipment industry currently has a combined market size of 65.8 billion yuan (2019), the industry was only 19.4 billion in 2013, 2013-2019 to experience up to seven years of positive growth. In terms of laser cutting, the penetration of laser for traditional cutting methods is about 26.26%-30.65%, and the proportion of high power (above 1500W) in laser cutting equipment is only 20.8%.

In laser welding, due to cost reasons, laser welding accounts for a smaller proportion of the welding market, and is currently used more in automotive, battery, precision metal processing, and optical communication, etc.

With more than 25 domestic companies engaged in the R&D and production of ultrafast lasers in 2019, the market space reached 2.45 billion yuan in 2019, which has grown into a market equivalent to 30% of the domestic fiber laser revenue volume.

Laser processing industry: cutting has the properties of industrial consumables. It needs to broaden the emerging application scenarios and grasp the link with a competitive threshold.

According to the wavelength, continuous fiber lasers generally belong to the near infrared light; IPG lasers are extending to lower wavelengths.

According to IPG's annual report, lasers are being extended to lower wavelengths, and semiconductor lasers, visible light lasers (blue light, green light, etc.) and UV lasers are the main products they are currently expanding. 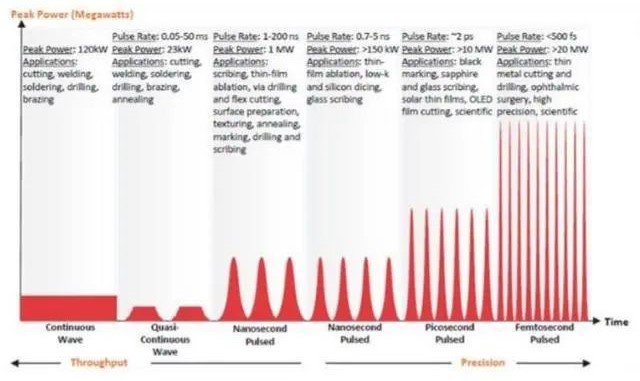 Among industrial lasers, fiber lasers have the best growth, solid-state lasers have grown in the past two years, and gas lasers are gradually shrinking. 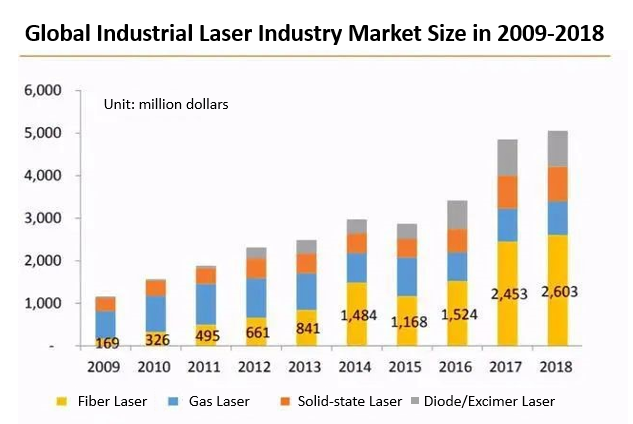 Among all downstream uses of laser equipment, industrial processing is the most dominant application direction, accounting for 40.6% of all laser uses in 2019; down 4.4 pct compared to 2018.

Instrumentation and sensing (more applications in detection) and research and military applications become relatively fast-growing areas, with 8.4% and 12% in 2019, up 1.4% and 5%, respectively, compared to 2018.

The combined market size of China's laser and laser equipment industry currently reaches 65.8 billion yuan (2019), with the industry only 19.4 billion in 2013 and experiencing up to 7 years of positive growth from 2013-2019. We believe that industrial lasers as a whole belong to the general automation category. 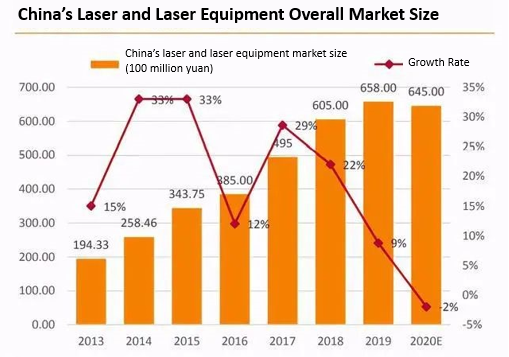 Laser processing penetration: in the view of the laser equipment, cutting and welding equipment market space

And according to the China Laser Industry Development Report (2019) and our estimation, the stock of laser equipment for cutting in China is 7~81.6 thousand units by the end of 2019; the penetration of laser for traditional cutting methods is about 26.26%~30.65%, without considering the efficiency difference.

The efficiency of laser cutting in the medium-thick plate scene is inferior to that of plasma cutting equipment, so the actual penetration may be lower than the above estimates; as the proportion of high power (above 1500W) in laser cutting equipment is only 20.8%, the penetration of high power for traditional medium-thick plate cutting methods is even lower.

The welding market has a vast space, with the combined annual revenue of metal welding and cutting manufacturers above the scale reaching 47,546 million (2019), according to the National Bureau of Statistics.

Laser welding accounted for 16% of the overall industrial laser applications in 2017. Then the estimated volume of laser welding equipment is about 9.7 billion yuan (this estimate may be high because laser welding is more commonly used in the foreign automotive industry). 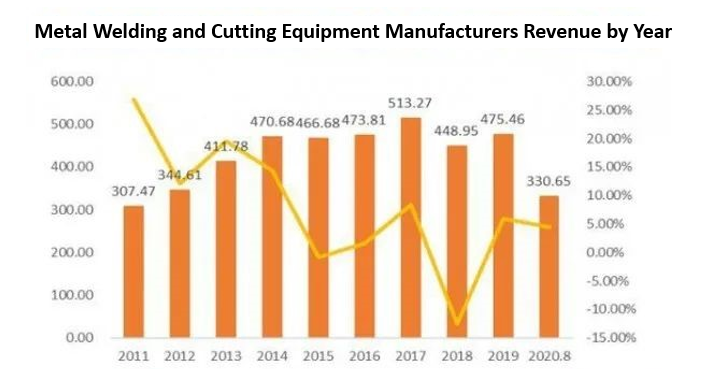 The trade war between the U.S. and China has been eased to some extent, and the import and export of laser products show signs of comeback. lasers continue to expand in the research and military markets in 2019, with a growth rate of more than 21%.

Market size of China's laser industry: the market for lasers in China grew in 2019 but began to slow down compared to the previous two years. The total sales revenue of the laser equipment market in the industrial, information, commercial, medical and research sectors was $65.8 billion, an increase of 8.8 percentage points year-on-year from 2018.

There are more than 25 domestic enterprises engaged in the R&D and production of ultrafast lasers in 2019, and the market space reached 2.45 billion yuan in 2019, which has grown into a market equivalent to 30% of the revenue volume of domestic fiber lasers. 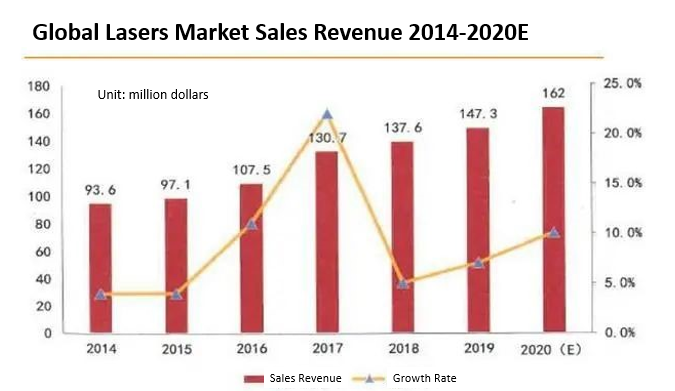 The laser industry chain is long and the market is large, thus there are a large number of listed and unlisted companies.

The trend in recent years: the segmentation is becoming more and more specialized. In terms of competitive intensity, laser equipment is more competitive than lasers and laser materials & devices.

CIOE 2021 - Lasers Technology & Intelligent Manufacturing Expo, will attract 300+ famous brands such as Han’s Laser, HGTECH, Hymson, Trumpf, Everbright, Elite, DERAY, DA PENG, Raycus, JPT, Max to showcase topnotch products and solutions in laser chips, laser optical components and devices, lasers, laser equipment, etc. The expo will be the best place to source the latest laser products and to be inspired by the market. Register now and get the free admission to connect with industry professionals at Shenzhen World Exhibition and Convention Center on September 1-3, 2021. 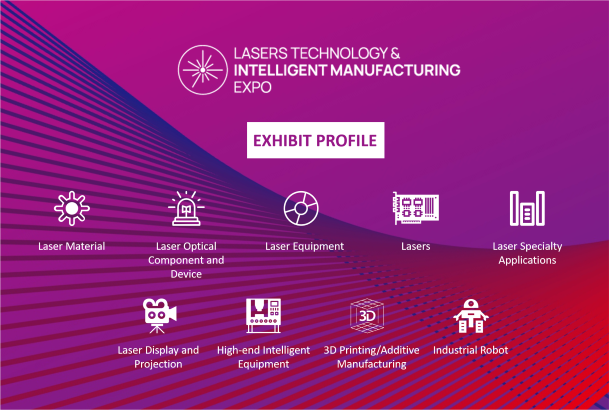